Green Hills has been promoting the three R’s – Reduce, Reuse and Recycle since its inception in 2014. We made presentations on the subject in schools and conducted rallies and events each year on World Environment Day with the participation of the high schools of Almora.

In 2015, the students created models to present their ideas for ensuring a clean, healthy town.


In 2016, the focus was on the health hazards caused by unprofessional recycling and dumping of e-waste. The young members of D-Shadow academy raised awareness through flash mobs to the tune of Battameez Dill in different parts of the market.

A quintal of e-waste was collected from schools and households and taken by Attero Pvt. Ltd. to their state-of-the-art recycling facility in Roorkee.

In 2018, educational material on plastic pollution was made available to high school teachers who then guided their students in writing and performing plays on beating plastic pollution, the theme of World Environment Day. Eight high schools performed excellent plays in the presence of the MLA and the President of the Nagar Palika Parishad.


In 2019, the youth participated in a Run for Clean Air and were given saplings that they nurtured for our reforestation initiative.


We have been working with the District Administration, the municipal authorities and Almora Cantt Board to introduce segregation of waste at source and organise door-to-door collection followed by recycling of dry waste, composting of wet waste and incineration of insanitary waste. This was very successful in the Cantonment area that was since declared the second cleanest Cantt in the country by the Swachh Bharat Abhiyan. This video shows how quickly residents took to segregation at source.


Our work took on a new dimension in 2017. Under a consultancy contract with the Swiss agency for Development and Cooperation, we made an agreement with the Public Works Department (PWD), Kumaon and the Prime Minister’s Gram Sadak Yojana (PMGSY) to use plastic waste in road construction. Our team of seven waste collectors gradually covered all the wards of Almora town and three neighbouring villages collecting segregated plastic door-to-door and transporting it by motor-cycle to godowns provided by the Nagar Palika.


About 60 per cent of residents started segregating their waste and handing it over to our team. Ten tonnes of plastic waste was collected, taken to Kathgodam for shredding and used by the PWD and PMGSY to build five kilometres of roads in the district. Three years later these roads were still in excellent condition.


In 2019, our supervisors worked with the sanitation staff of the municipality to continue door-to-door collection of segregated waste that could then be recycled. They went house-to-house with these flyers explaining how the waste should be segregated. Unfortunately, despite the efforts of our supervisors to motivate the safai karmcharis, we did not obtain their cooperation. We have now diverted our attention to the rural areas of Almora District where the Swajal programme of the government is creating the infrastructure for solid and liquid waste management. 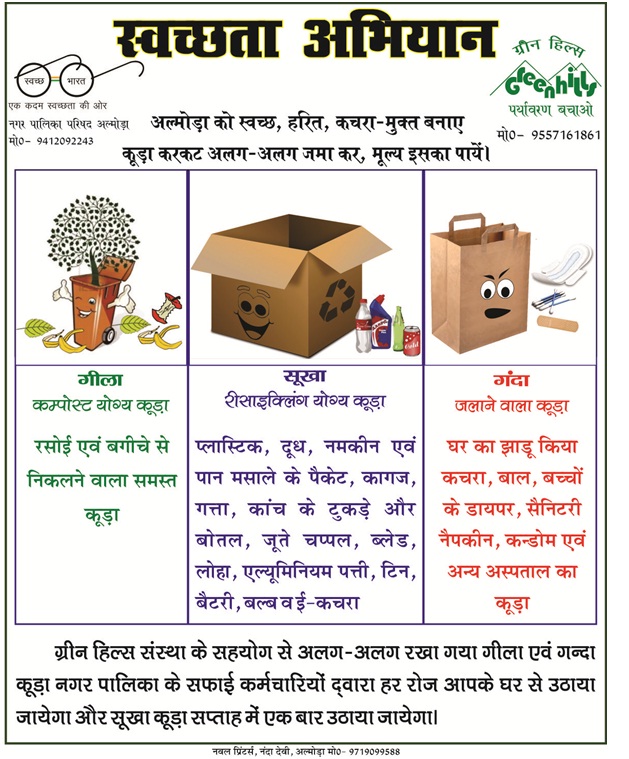 In January 2020, a group of residents from Majkhali, near Ranikhet, requested us to organise waste collection in their villages. A clean-up drive was organised in March with the participation of local school children. However, regular waste collection was postponed for months due to COVID.


Waste collection on the Kasar Devi Ridge was launched on October 4 with a Green walk and photo safari organised by us with the Uday Shankar Photo Academy. Since then, the Green Hills team has been clearing all the waste littering the main road. Over a ton of it has been cleared- From December 2020 to May 2021. Green Hills worked with the District Administration to collect dry waste and insanitary waste from Chitai, Kasar Devi, Katarmal and Majkhali. Materials Recovery centres were to be constructed under the Swajal programme in Kasar Devi and Majkhali with incinerators for bio-medical waste. These did not materialise, making recycling impossible. Besides, the pick-up that was used for waste collection was requisitioned during the second COVID wave and is no longer at the disposal of the Green Hills team. This created a huge pile up of waste in the areas that were being serviced. In Kasar Devi, hotel and home-stay owners are now organising waste collection privately and transporting it to the official dump site. Our hopes of creating a model public-private partnership for ecological solid waste management in peri-urban areas were dashed.


After this setback, we focussed on recycling two types of waste:

E-waste that is particularly hazardous when dumped or burned, and kitchen waste that produces a potent green house gas – methane – when mixed with other waste but becomes a valuable resource when composted.

We cannot imagine a day without our mobile phones, lap-tops, music systems, etc. Electronics have invaded our lives. They are also invading our landfills and dump-sites with hazardous heavy metals and other chemical residues that have grave consequences for our health. India is now the world's third-biggest e-waste generator, producing over 3.23 million metric tonnes of e-waste per year!

On September 9, 2021, we organised a press conference to launch an e-waste collection drive in Almora and Ranikhet. Boxes were placed in schools, flyers distributed and banners put up to inform the public about it. We were able to collect more than 350 items (personal computers, TVs, mobile phones, cameras, CD players, chargers, etc.) that have been sent for recycling to Attero Pvt. Ltd., Roorkee, a company that specialises in eco-friendly treatment of e-waste. We hope that people will continue to opt for responsible recycling of e-waste and thus safeguard public health.

About 60 per cent of household waste is composed of organic waste that can be composted and used to increase the fertility of the soil. The problem is that urban areas often lack open space for compost pits. Bokashi is a Japanese method of fermenting organic waste in an air-tight bucket with effective micro-organisms that speed up the composting process. No odour or flies! You will find complete instructions for this type of composting under Resources/Managing your waste. Green Hills is experimenting with this method in Almora town with 100 volunteer families. If you wish to participate this is what you will need to do: Bokashi flyer.